ITS in Malta follows the best practices and guidelines that have been established under the EasyWay programme. EasyWay (EW) is the largest European project focusing on the deployment of Intelligent Transport Systems (ITS) for roads. EasyWay involves 30 European countries and addresses EU transport objectives, regarding namely the deployment of ITS on the major road networks across Europe. EasyWay is supported under the TEN-T programme (Trans-European Network for Transport).

Malta is currently an observer of this programme. 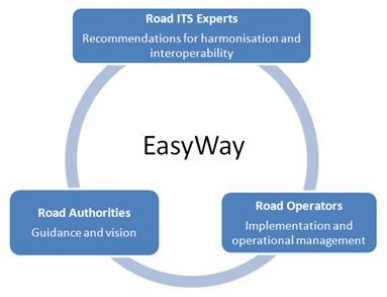 The main objectives of EasyWay are to improve safety, reduce congestion, reduce environmental impacts and promote the continuity of services at regional and European level through the coordinated deployment of real-time formation, traffic management and freight and logistics services.

EasyWay is a unique platform bringing ITS expertise and recommendations up from the operational level within the Member States to the European level.

From its beginnings in 2007, EasyWay has established a huge body of knowledge and consensus for the harmonisation of ITS deployments. This knowledge has been set down into documents providing guidance for ITS Core Services deployment: the EasyWay (EW) Deployment Guidelines. In their first step, the EW Deployment Guidelines provided best practices which have successfully contributed to the deployment of ITS all over Europe, and a first definition of common Levels of Service for ITS Core Services.

Building on from this first approach, EW partners have moved a step forward in order to propose for each ITS Core Service: a clear definition, requirements and recommendations to facilitate a harmonised deployment in Europe. The EW Deployment Guidelines provide valuable information in the scope of the ITS Directive (2010/40/EU) process, which has been established to define a legal framework for ITS deployment in Europe.

EW partners have invested €500m during the period 2010-2012 to deploy harmonised Intelligent Transport Services on the TEN-T road network. The European Commission provides a financial support of €100m. A comprehensive review of the programme was undertaken and it demonstrated that at the end of 2011, EasyWay II was exceeding the expected progress of its plan to deliver harmonised services. By the end of 2012, it was expected that EasyWay would have made a greater contribution to network efficiency and road safety than what was originally anticipated. EasyWay’s commitment to deploy harmonised and seamless ITS services on the network in conjunction with the EW Deployment Guidelines have therefore demonstrated a considerable amount of achievements by mid way of the programme.

The European policy papers “Europe 2020” and the White Paper “Roadmap to a single European Transport Area” (COM (2011) 144) state that the European transport sector is a backbone for the European economy, but it is also contributing to the mitigation of adverse impacts on safety, the environment and efficiency. A common effort is needed to link and optimize the different modes in all aspects, plus to integrate them into a Single European Transport Area. Besides extending hard infrastructures, the application of ITS is the only instrument to make existing infrastructures more efficient, safer and more environmentally friendly and to provide the information which enables integration of different infrastructures and modes. The national ITS Action Plans, the ITS Directive and the TEN-T Guidelines are instruments to help execute the White Paper.

For more information and detail of the best practices for implementation, please view the documents below:

More information about EasyWay can be found here