The Ministry for Transport and Infrastructure, together with Transport Malta, have come up with a comprehensive plan of action to put land transport in Malta on track to environmental sustainability while addressing a number of EU obligations that Malta must fulfill under the 2020 Climate Change and Energy Package.

By 2020, Malta is obliged to limit its greenhouse gas emissions increase to just 5% compared to 2005 recorded levels. By the same year, a share of 10% of all transport fuels consumed at national level has to come from renewable energy sources. Additional targets emanating from the Air Quality Framework Directive and the Environmental Noise Directive must be addressed.

This National Action Plan has put the achievement of the above mentioned targets as its main goal. By implementing a gradual and phased policy for the electrification of transport (addressing both private and public mobility), and by building upon existing Plans and Measures, this Action Plan will contribute to reduce the negative transport environmental externalities for the benefit of all residents, especially those living in urban cores.

For more information and download of the Malta National Electromobility Action Plan: 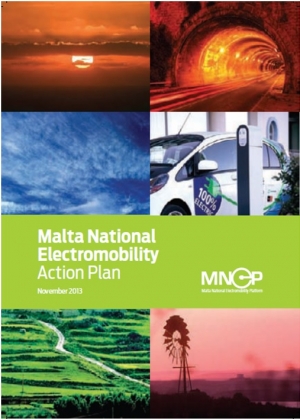 Intelligent Transport Systems (ITS) is defined as the key instrument for innovation and its deployment is considered to be one of the key measures in ensuring sustainable, efficient and competitive mobility in Europe. The main objectives of the action plan are for transport and travel to become cleaner, more efficient, safer and more secure.

Malta has drafted an ITS Action Plan Report in August 2011. The National Action Plan will aim to accelerate and coordinate the deployment of ITS in road transport, including interfaces with other modes of transport, outline the priority areas for action that are applicable to Malta and which will be deployed bearing in mind Malta's geographical specifications. Another report on the activities planned for the next five years related to the deployment of ITS in the country, was also submitted in January 2013.

The Air Quality Plan for proposed traffic measures as part of the plans and programmes in compliance with Directive 1996/62/EC, was published by Government in September 2009. The Air Quality Framework Directive requests Member States to put in place plans and programmes in cases where air quality concentrations for the regulated pollutants are exceeding limit values specified in the daughter Directives.

Malta has been recording exceedances for pollutants related to traffic since 2004. The Air Quality Plan report, drawn up jointly by the Malta Environment and Planning Authority (MEPA) and the Malta Transport Authority, proposes short-term and medium-term measures to be able to comply with limit values for various pollutants. These traffic measures will be forming part of a consolidated document which will include additional measures from other pollution sources (such as the construction industry, small industry, power generation). The public transport reform was one of the radical measures to contribute in achieving specific goals such as reduction in vehicle emissions, encouraging modal shift, reduce traffic impact of new developments, managing the road network and promoting cleaner vehicle technologies.

For further information and statistics, the Air Quality Plan Consultation Document can be downloaded from here (pdf, 2009, 834Kb)